Weirdest Christmases from around the world

This year presents many unprecedented challenges when contemplating catching up with friends and family around the world, so Christmas Tree Express wanted to bring the world, and our trees, directly to you. In investigating how different countries celebrate every year we thought we would list some of the most weird and wonderful for you here:

Perhaps one of the most terrifying takes on Christmas can be credited to the Austrians who every year have to endure the prospect of running into the legendary beast, Krampus. The purpose of this unsightly creature, with horns, fangs and long tongue, is to scare naughty children into being nice. According to folklore, Krampus scours the towns on the night of 5th December. The next morning, children look outside their door to check whether the boot they have left there contains either presents or a rod, depending on whether they’ve been good or bad. 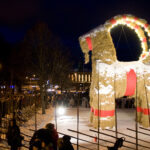 One of the oldest traditions in Sweden is that of the Yule Goat. Since the 11th century it’s been reputed that a man-sized goat, led by Saint Nicholas, would roam the land and had the power to control the devil. Perhaps they should introduce one to Krampus in Austria! These days you may in city centres find giant straw versions of the Goat that come to a dramatic end by being set on fire. 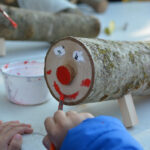 Although one of the weirdest traditions from around the world, we at Christmas Tree Express love this one as it presents another recycling opportunity for the trunk of our Christmas trees. Tió de Nadal is made from a hollow log, with stick legs, a smile, and a red hat. Every evening between December 8th and Christmas Eve, the children feed the log small treats with water, and leave him under a blanket to keep him warm.

On Christmas Eve, children are encouraged to beat the log with sticks while singing traditional songs which include lyrics such as “Poop log, Poop nougats, Hazelnuts and Mató cheese, If you don’t poop well, I’ll hit you with a stick, Poop log!”. After Tió de Nadal is properly beaten the log magically poops out presents and candy – at which point he is then considered useless and thrown into the fire for warmth. 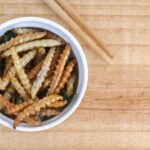 Many believe the best source of protein during Christmas is the traditional turkey roast; however in South Africa it’s actually caterpillars that are eagerly anticipated as they are freshly fired up to be served as part of the Christmas celebrations. Of course, these can’t be just any caterpillar – to stay true to tradition they must be the Pine Tree Emperor Moth variety or Christmas Caterpillar (which is easier to ask for at the meat counter). 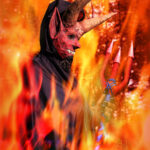 If you happened to be swapping London for the streets of a Guatemalan city this winter then you will more than likely come across groups crowding around devil-shaped piñatas and counting down to light the effigies and standing back whilst the firecrackers inside bang, causing the devil to move wildly before keeling over. A stark warning to any evil spirits that had contemplated making the area their home.